A very exciting update for Tiny Life is dropping today: 0.13.0 adds camera rotation and a pretty major upgrade of the game’s map! Check out the screenshots, explanations and additional features in this post!

Before we start, though: I recently realized that you can rate the game on itch, which apparently helps with visibility and the like. If you’ve already played the game, and you enjoyed it, and you have an itch account, it would be great if you could do so! All you have to do is go to the game’s itch page and press “Rate Game” in the top right. Thanks!

Now to the exciting part, and the one that a lot of yall have been waiting for: Camera rotation! You can now rotate the camera in the game using the C key to rotate clockwise and Shift + C to rotate counter-clockwise. You can also use the little rotate buttons in the top right of your screen as well. Here’s a cool preview from an in-dev version that shows camera rotation in action:

Additionally, if you’re interested, here are some fun in-depth pictures from when I was still working on making everything compatible with camera rotation. It turns out that, while you can just literally move and rotate the camera in a 3D game, it’s a lot harder in isometric 2D because just rotating the camera would make all of the objects look skewed and absolutely terrible. So this took me quite a while to get working, but it was definitely worth it in the end! 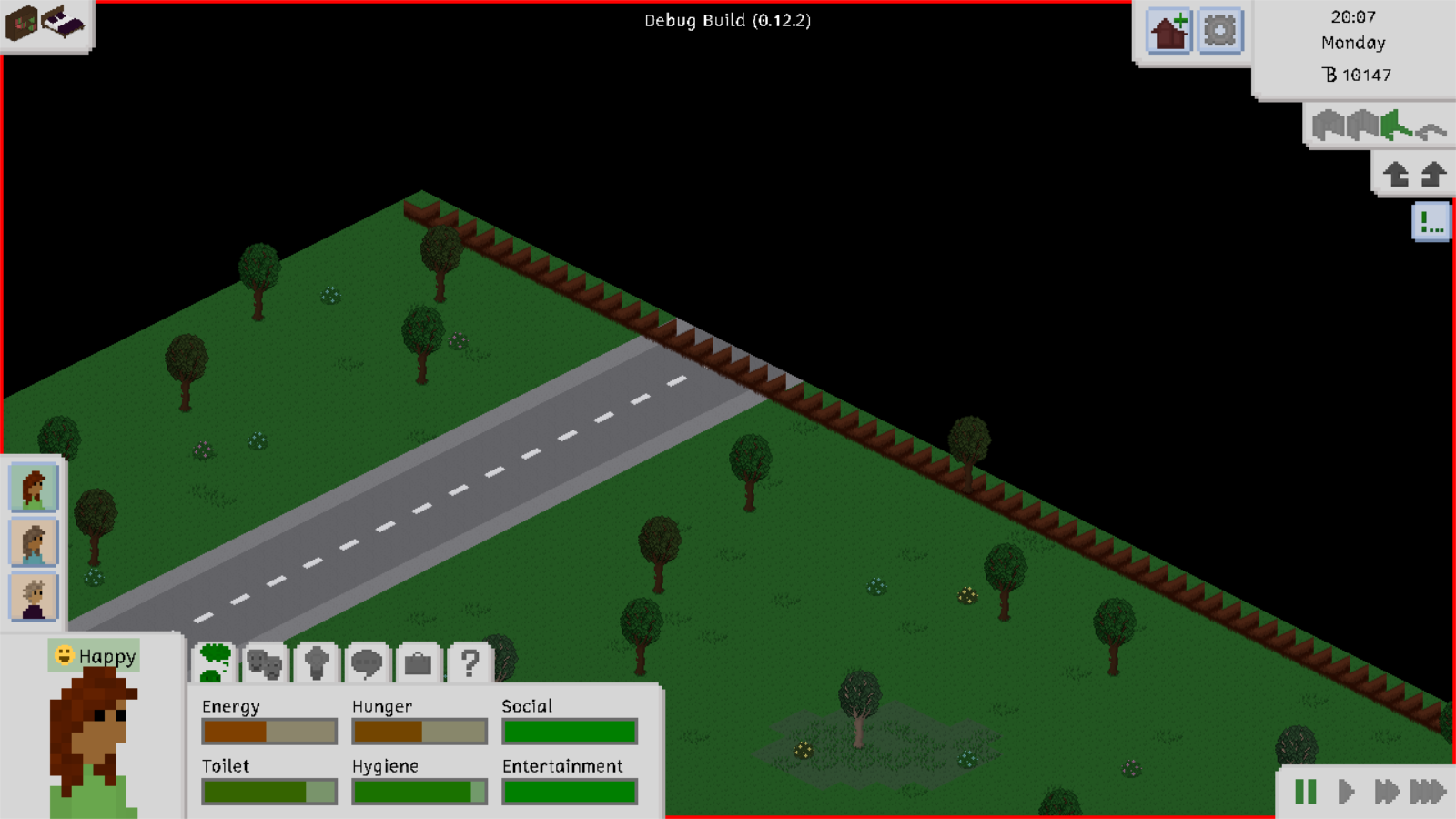 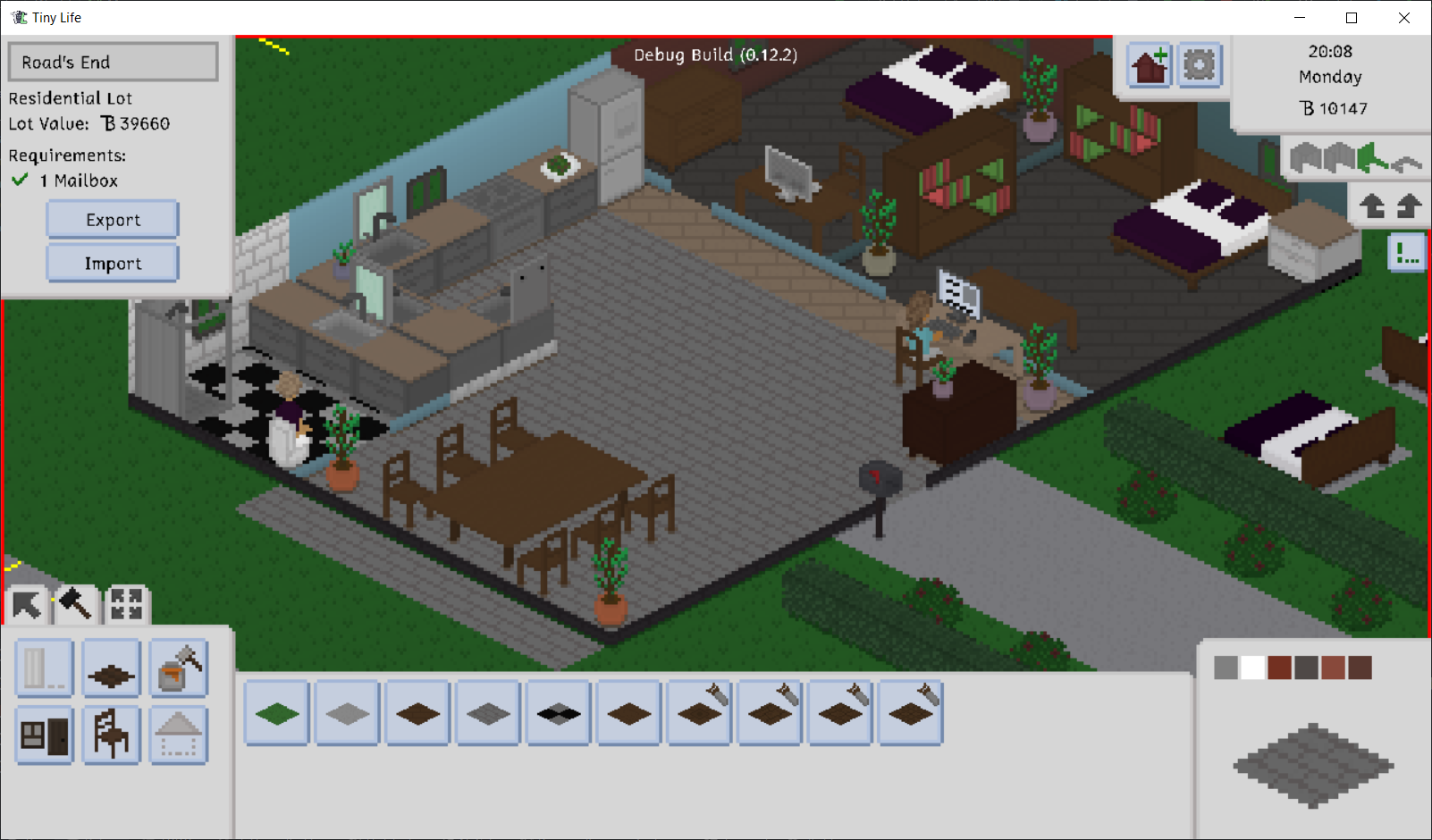 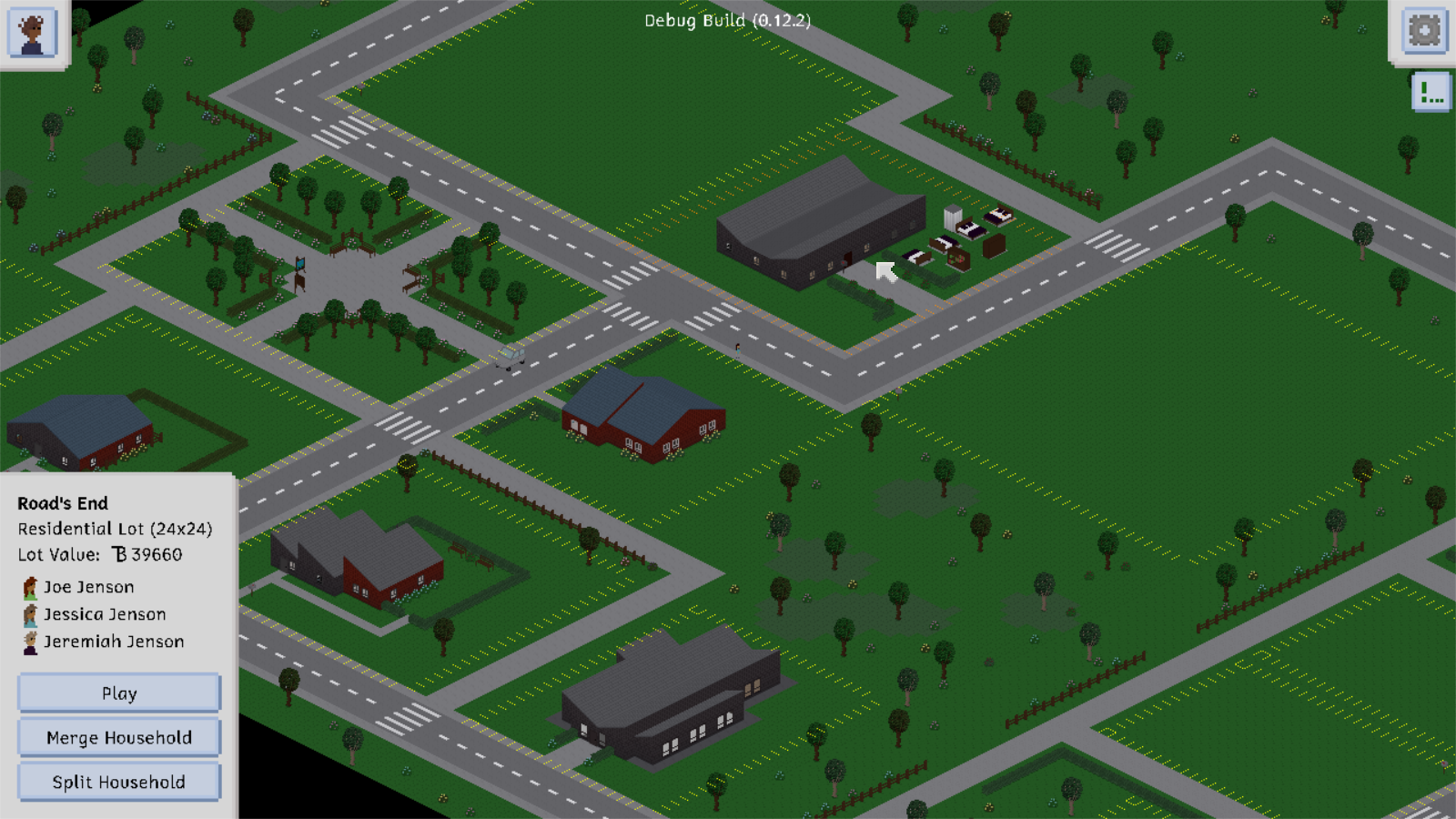 During development, there were also some much more cursed pictures to be taken, of broken roofs, rotated walls and backwards-walking people. But I thought I’d better spare everyone, especially future me.

An exciting addition in this version is the addition of a second area on the map. This new area is supposed to look a little more commercial and/or city-like, and so it has a lot more lots that are all a lot closer together. Along with this larger map, you get two new lots: A new park and a new house, the latter of which is inhabited by the one and only Tom Tannenbaum.

Enjoy these pictures! I should note, though, that the first one is an in-development screenshot that doesn’t feature the park and new residential house yet. If you want to see the park, you’ll just have to boot up the game yourself! 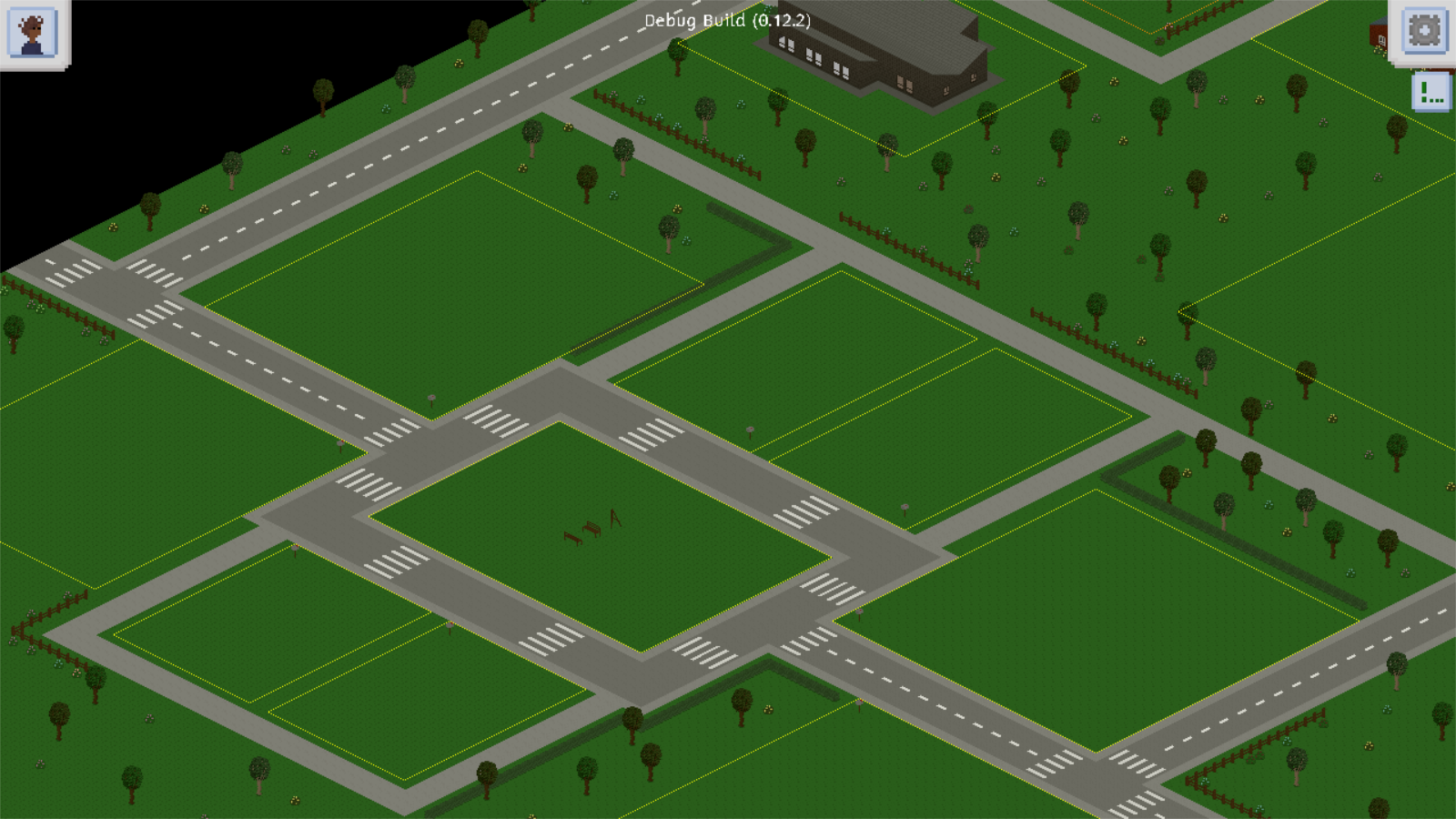 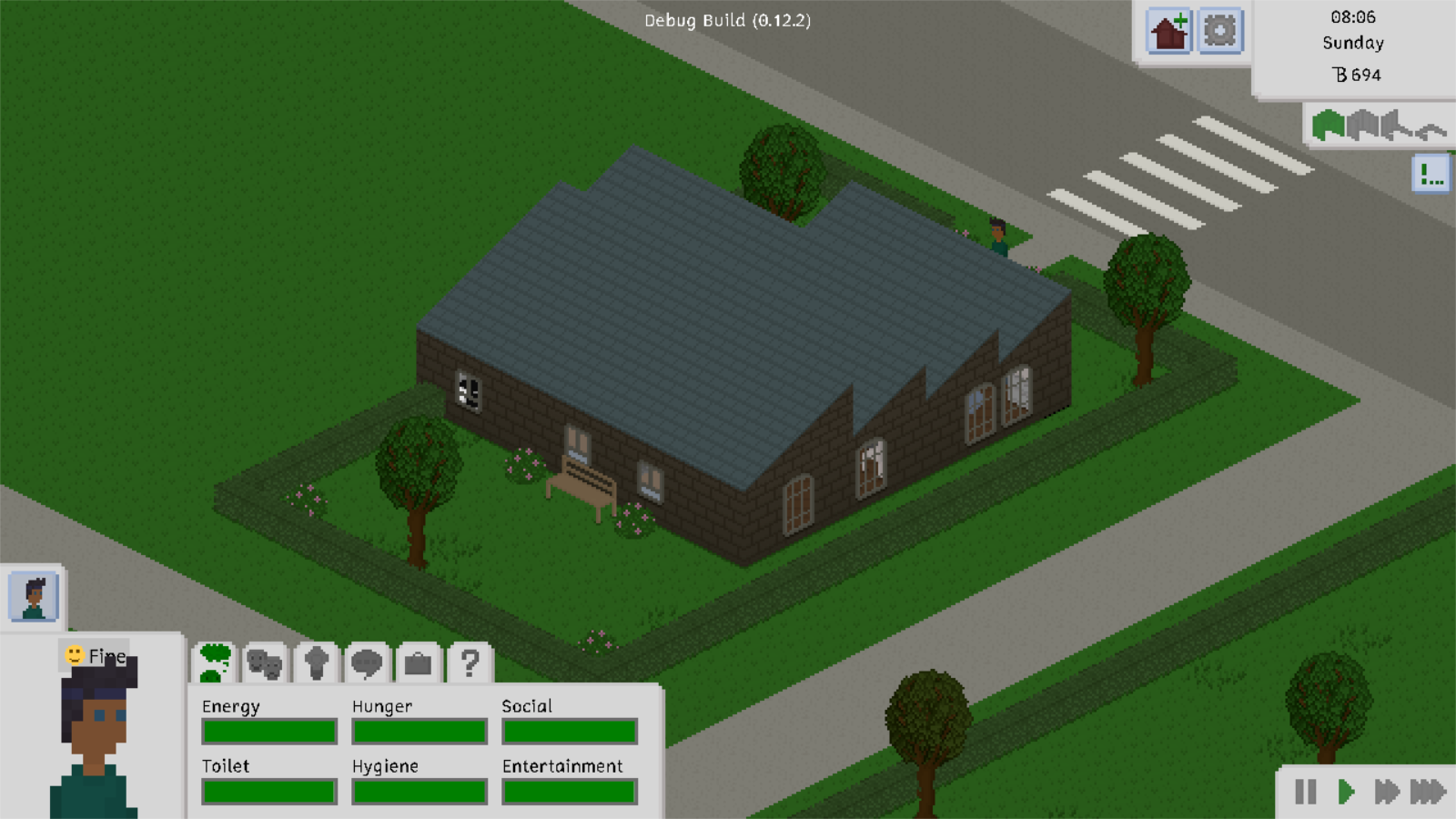 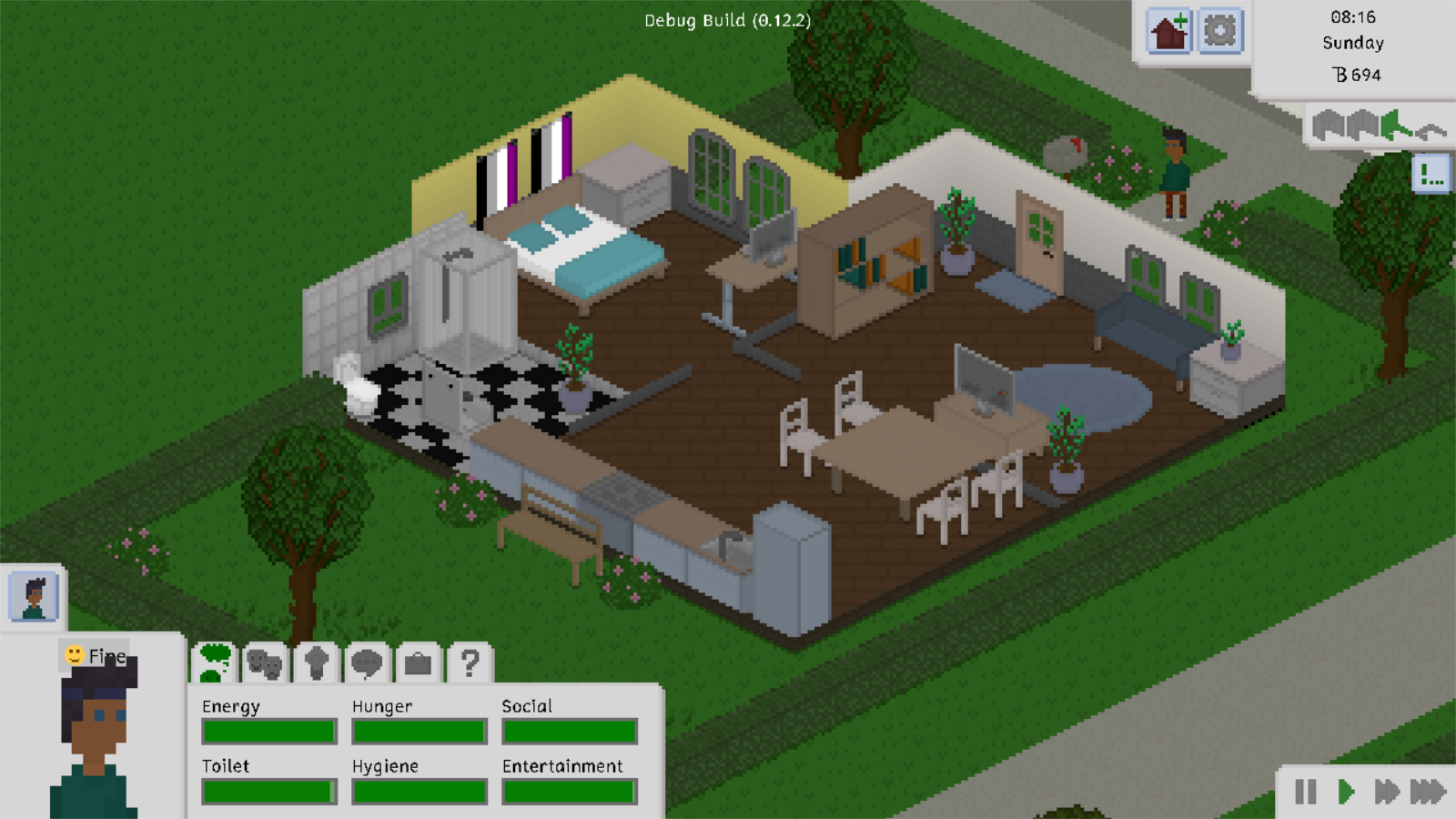 Oh, also, before I forget to mention this: It’s pretty obvious, but the game finally has a proper logo now! This awesome logo was created by the lovely Tector, who previously worked on the Fitness set with me.

We debated a lot about the design of the logo, but I think this final version represents the game’s fun and light-hearted aesthetic and gameplay very well. 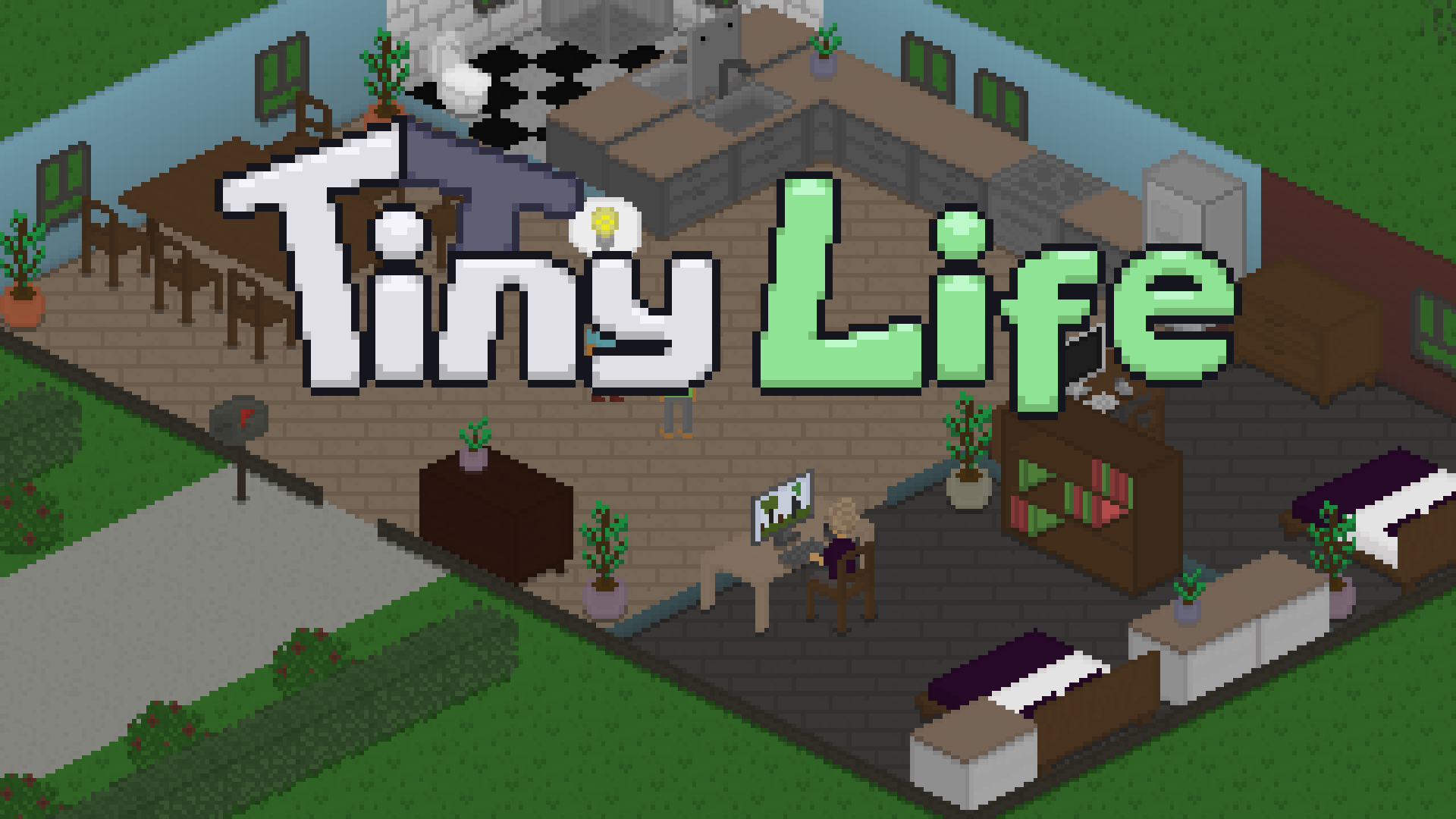 As always, here’s a copy of the full changelog for your enjoyment. Of course, you can also look at this changelog in the game’s main menu.