Hello everyone! It’s that time again where we release a Tiny Life update, and with it, a fun devlog post that features a bunch of descriptions and images of the new stuff.

First though, some self-promotion.

If you’ve been following the Twitter for a while, you already know about a very exciting upcoming feature in the game: Children! They’re not here yet, sadly. But they will be, soon. If you’re interested in them, you can check out the information that was already posted on Twitter over the last few weeks!

A lot of people struggle with setting their own goals in a sandbox game like Tiny Life. Not only that, but even people who do set their own goal can sometimes start to feel like they don’t know what to do in the game.

Well, not to worry, because Life Goals are here! Life goals are a new system in Tiny Life, which can be found in a new tab at the bottom of the screen. 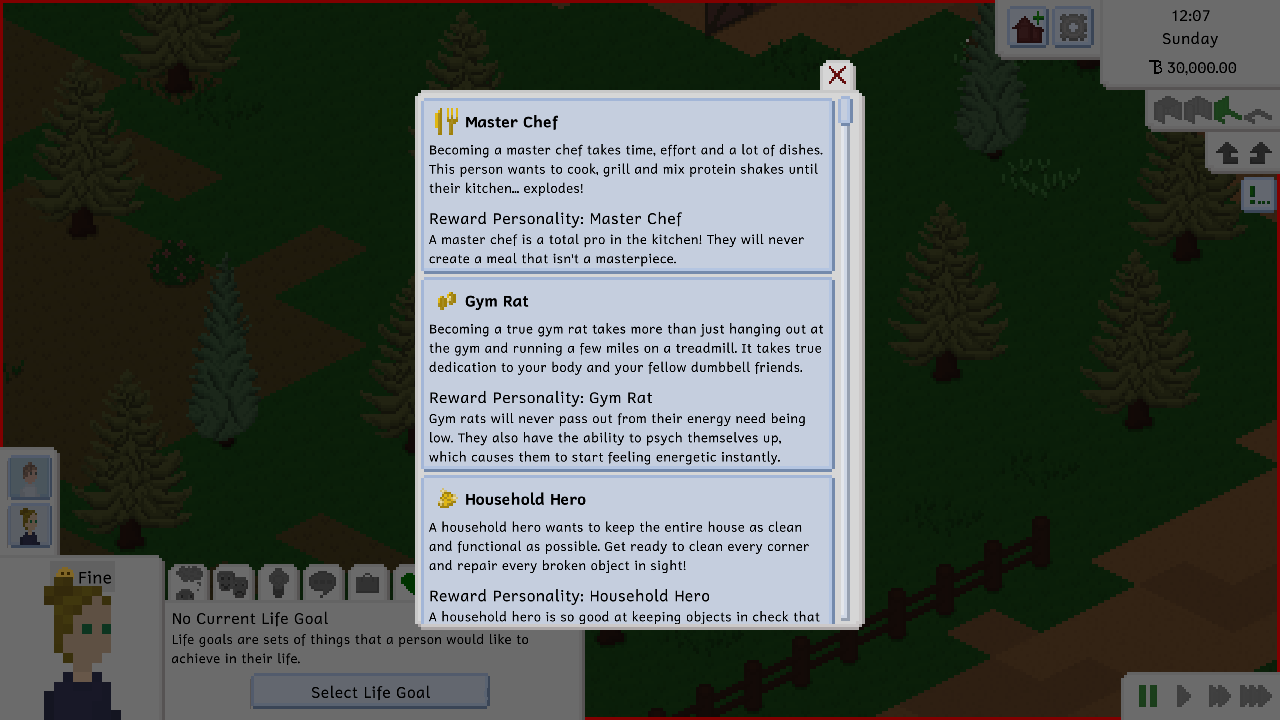 As you can see, a person can select a life goal for themselves, and there are quite a few to choose from right now. Of course, as development goes on, more will be added, though!

Each life goal features multiple stages, each stage containing one or more challenges that a person has to complete to complete the stage.

Upon completing a life goal, each person can unlock a unique hidden personality trait for themselves. These personalities usually have to do with the life goal itself, and they’re supposed to make life easier for the people that have them.

Here’s the one you receive when completing the Gym Rat life goal, for example.

Work is terrible. We all know this. But what’s even more terrible is coming home to even more work. We decided that this terribleness would fit perfectly into Tiny Life itself, which is why this update also includes daily tasks for some jobs (currently only teacher and firefighter, but more to come, as always).

Daily tasks can be completed for a little boost in job performance over the course of the following day. If the daily task is not completed, performance gain will be a little lower, but still good enough to get that promotion you’ve been working towards.

As always, here’s the full changelog for this update. You can also view this in-game by clicking on the little arrow button in the bottom right corner of the main menu.