Today is finally the day you’ve all been waiting for. Well, okay, it’s not that day yet. It is, however, the day that we’re releasing the official Tiny Life Demo, for free, for everyone, forever!

The Tiny Life Demo will be replacing the public beta both on itch and on Steam for now, as we discussed in our previous post about our plans for the demo. You don’t have to read that post if you missed it, though, because we’ll be summarizing everything in as much detail as we can here.

The most important thing that we want to say about the public beta is that you won’t be able to download it on itch and Steam anymore. It also won’t be receiving any more updates until the game’s official Early Access release a little later this year. Since the Tiny Life Demo doesn’t allow playing in Maple Plains City (more on that later in this post), we’ve decided to still allow players to download the last version of the public beta (0.28.0, specifically) for a little while, so that they can continue playing in their old saves until the Early Access release. When the Early Access version is released, you’ll be able to continue playing in your old saves from the demo and the public beta as well, if you like.

Anyway, let’s get on with what we have for you today!

Demoville is the first new world that we’re adding into Tiny Life after our initial, and still very beloved, Maple Plains City. While the full version of the game will feature both maps on Early Access launch, the Demo will only come with Demoville.

Demoville features some beautiful creations from some of our amazing community members, who have volunteered to work on the world with us. We want to show off the full world here, as well as the community-created lots, as we think they deserve some extra spotlight.

Here’s all of demoville, first and foremost. 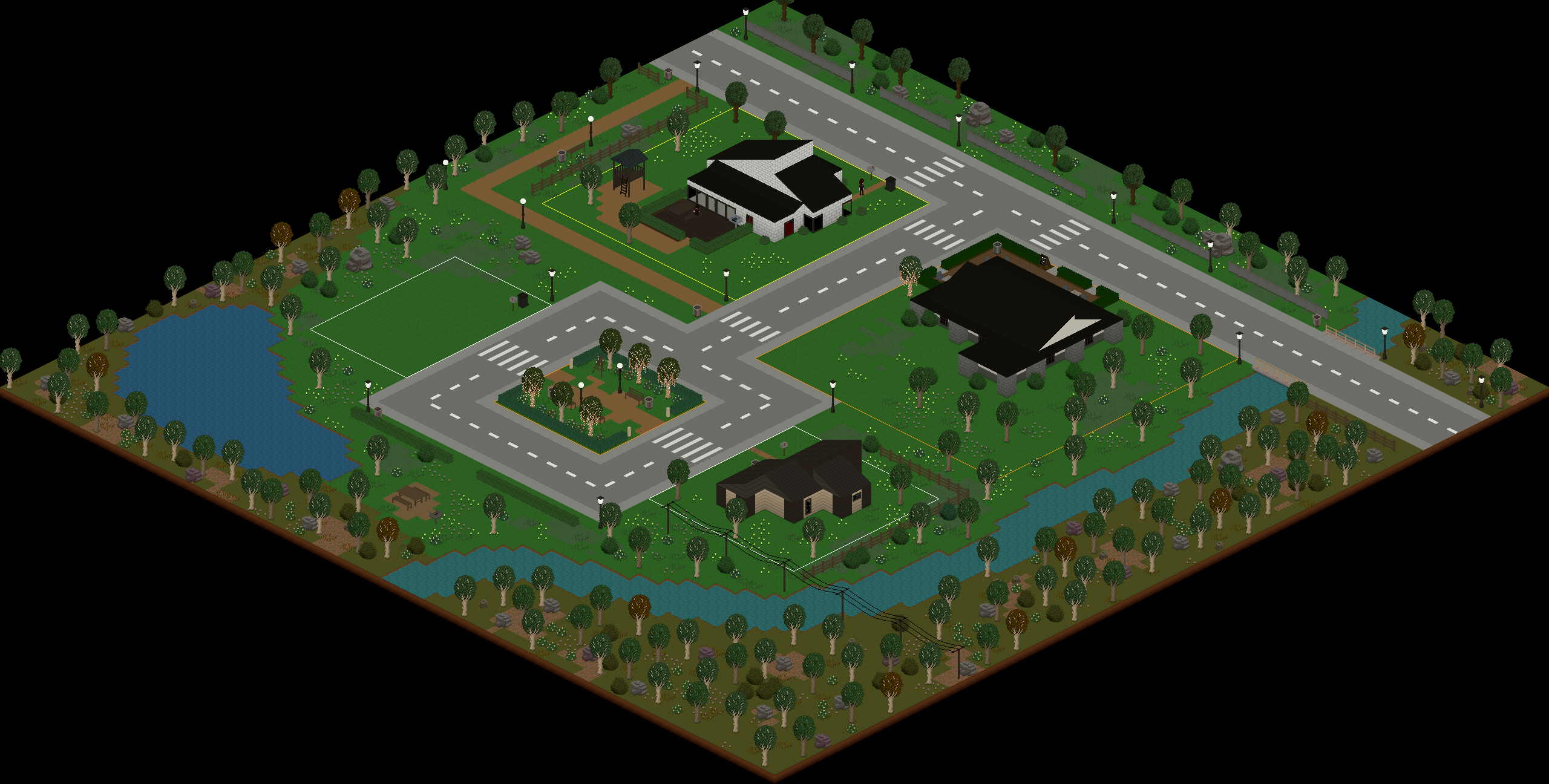 This beautiful house (that is inhabited by the Nicholson household) was created by CringePotato. 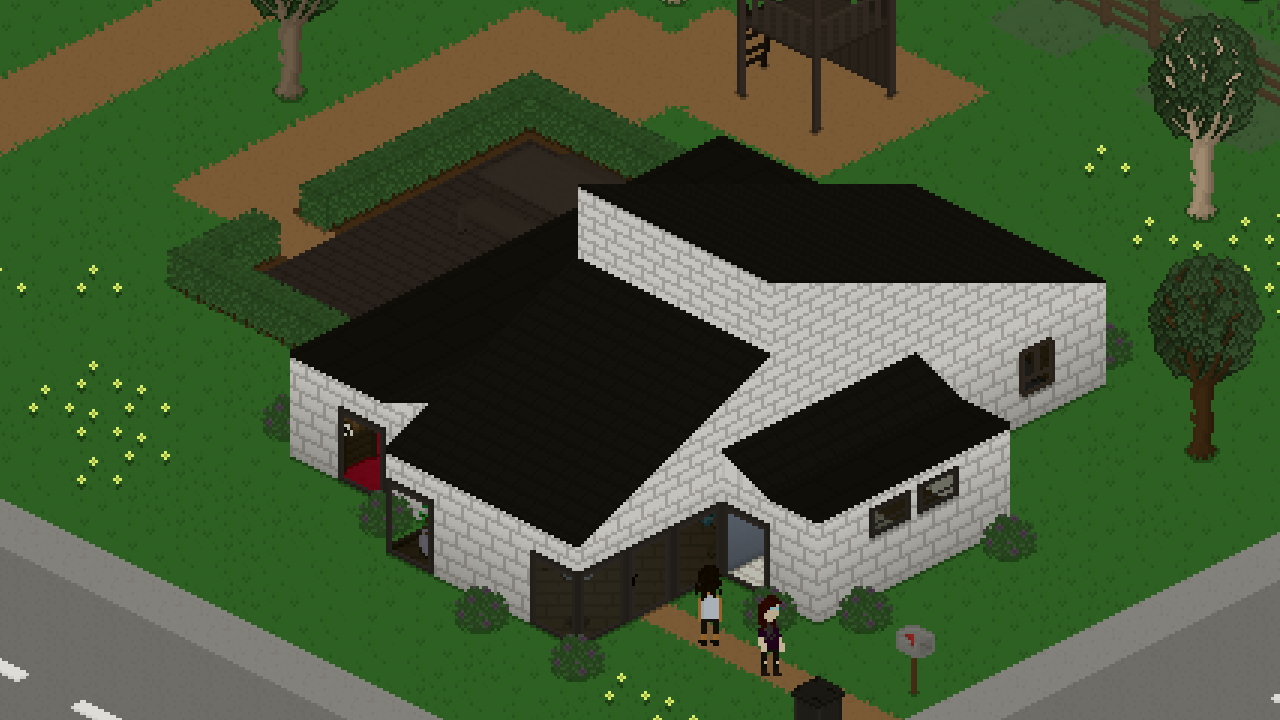 This is Bluebird Café, which a lot of Tinies will frequent, maybe even including you! It was created by 8dat, who also created its barista, Liam Lungo. 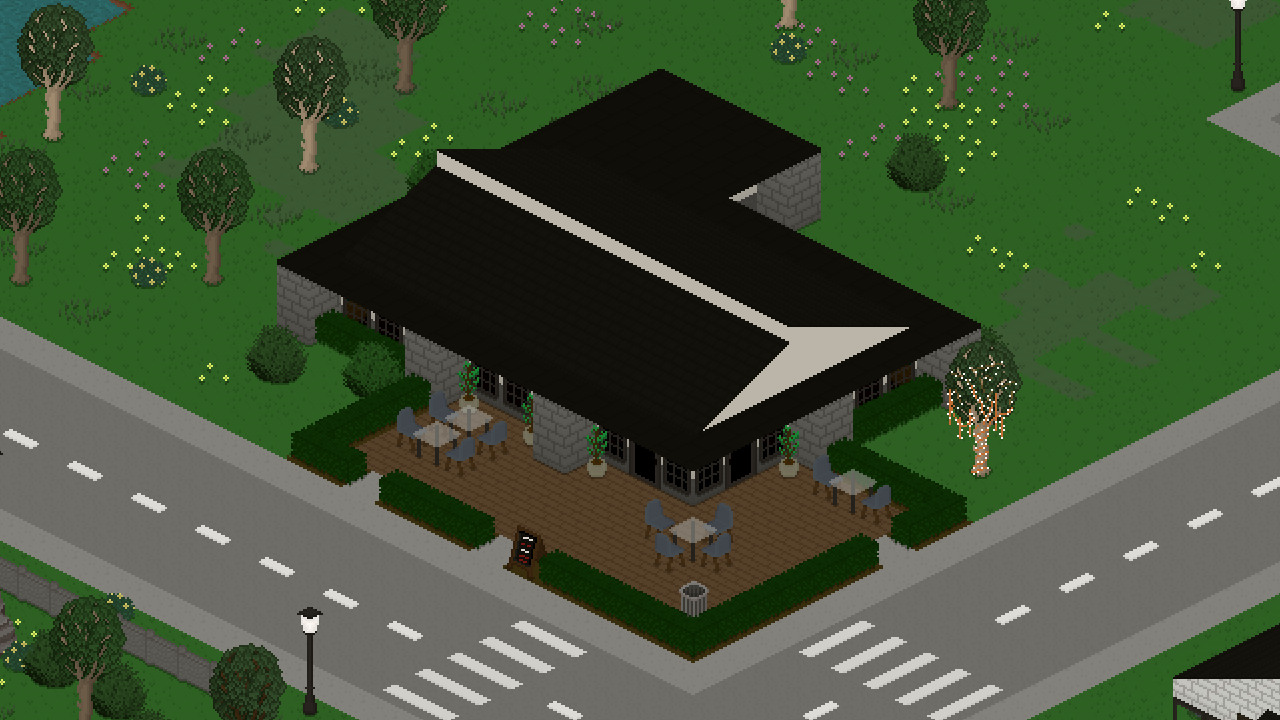 And lastly, this is Demoville Square 2, which is a small starter home that you can move into when starting a new save if you don’t feel like building your own house. It was built by DonZekane. 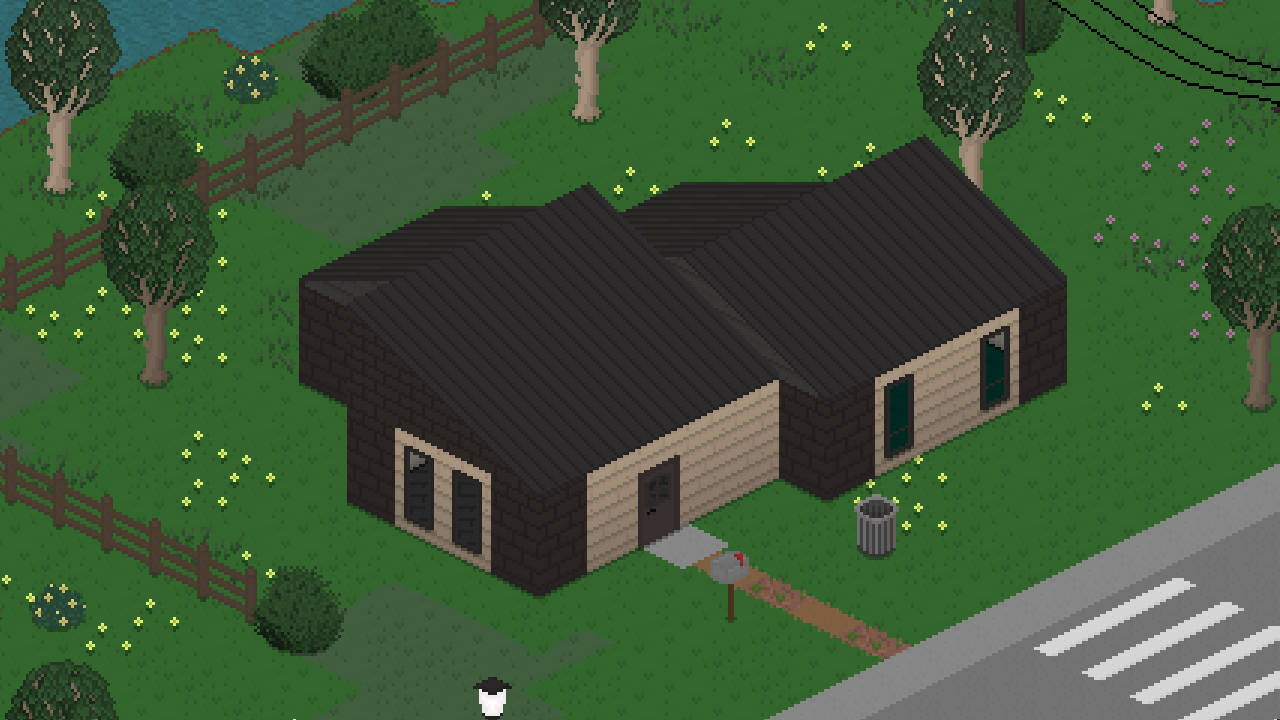 Along with Demoville, we’re also introducing a new life goal to the game that’ll only be available in the demo. The cool thing about that is that the reward personality, City Dweller, will persist with your Demo tinies if you decide to move into the full game with them. 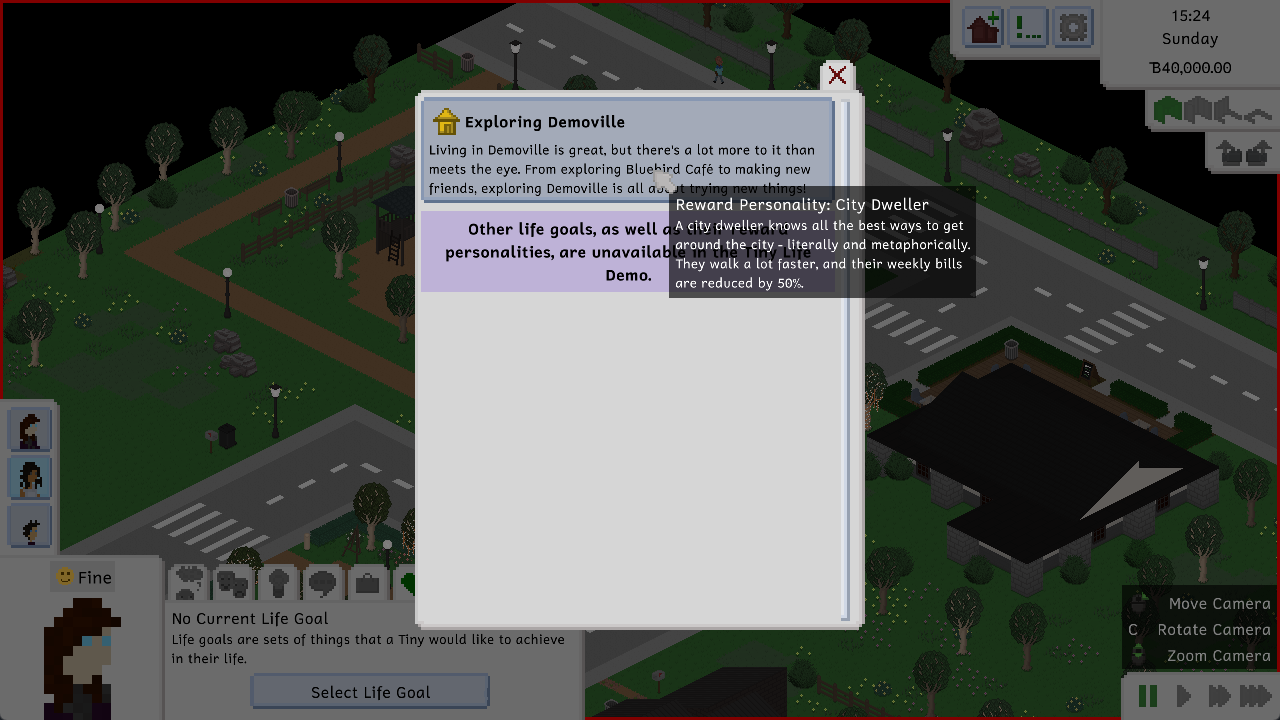 As you can see, all of the other life goals are unavailable in the demo - more on that now.

What the Demo Has

As you might be able to tell from the screenshot above, the life goals menu looks a little lackluster compared to what you’re used to from the public beta.

As discussed in our previously mentioned announcement, the demo will feature most of the game’s regular content, with a few caveats that are meant to incentivize buying the full game if you’re enjoying the demo enough to warrant spending money on Tiny Life. Here’s a brief summary of what those differences are:

As previously mentioned, once the game’s Early Access release is out, you’ll be able to continue demo save games in the full release, or export households and lots from your demo save games and move them into Maple Plains City or custom maps.

We’ve taken care to explicitly state what content is missing from the demo in-game in all the places that it is missing from. While playing, look out for these little purple boxes that’ll tell you what you can expect when buying the full game. 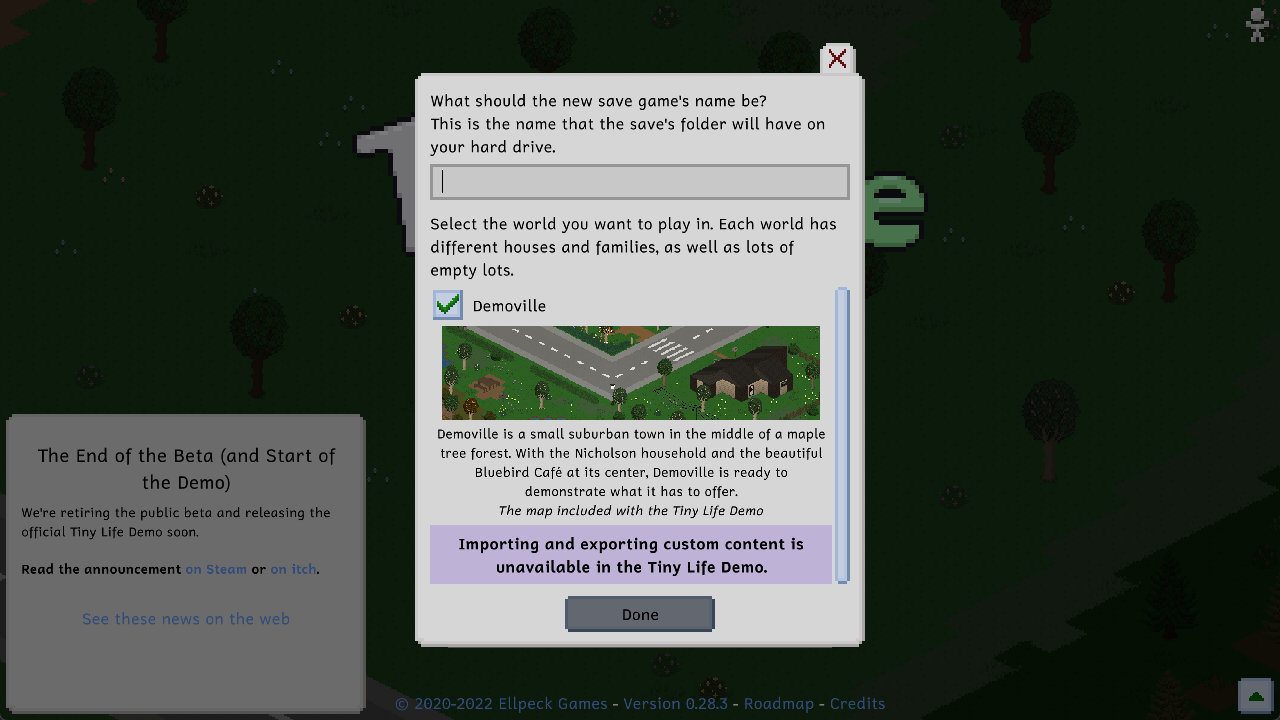 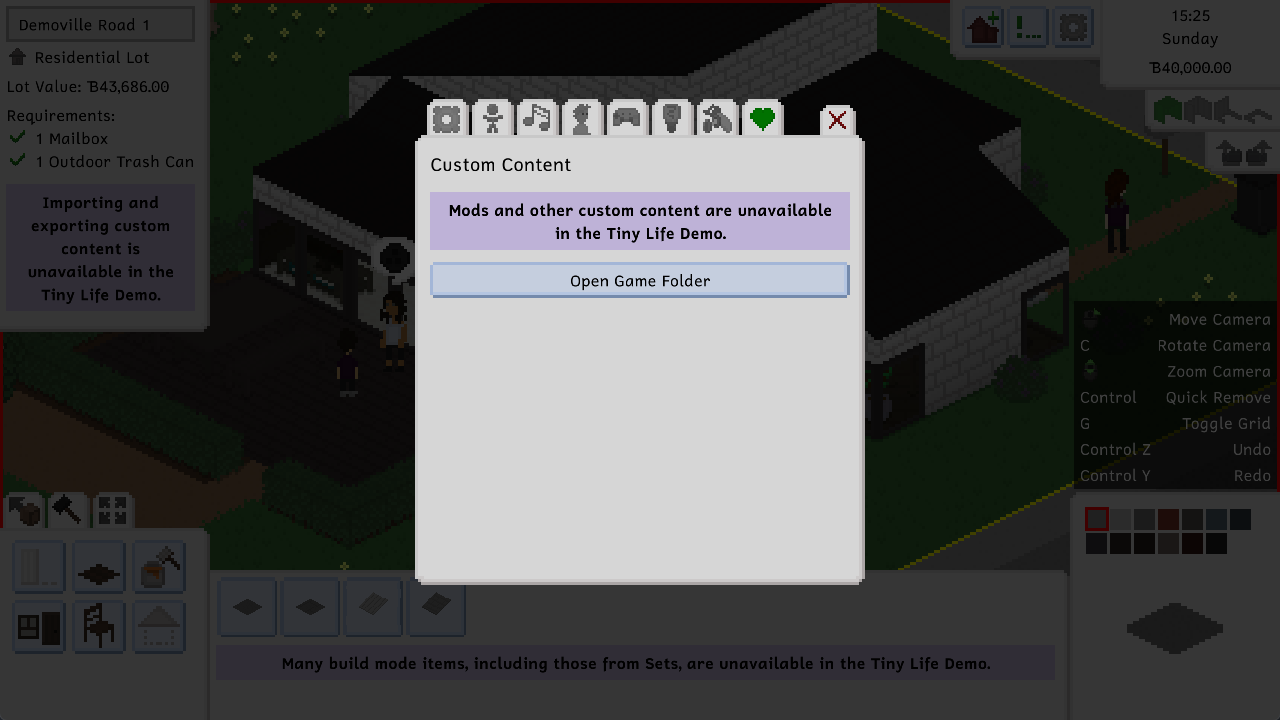 As with every update, there are a few new features and improvements to existing features as well, but we really wanted to use this post to highlight the content that is specific to the Tiny Life Demo. If you want to know more about what changed since the last public beta version, though, here’s the full changelog that contains all of the info you need!